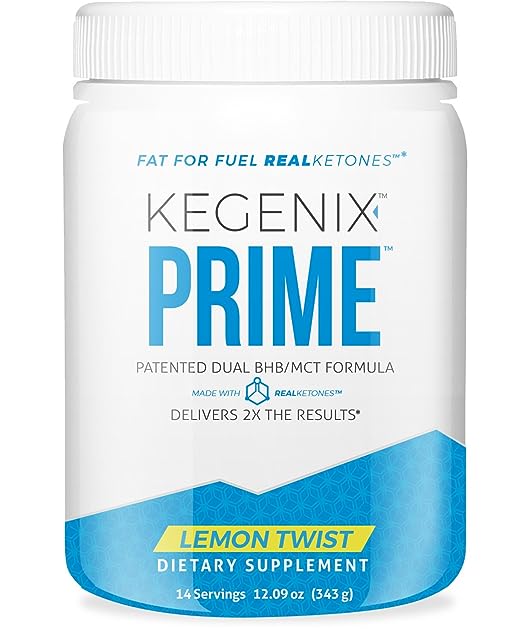 Kegenix Prime was developed by University of South Florida physician Dr. Dominic D’Agostino. It is a nutritional supplement created and made by Kegenix, a leading keto diet and lifestyle product company, and it was first introduced to the market in 2016.

Kegenix makes several products, all of which contain exogenous ketones. Kegenix Prime is an exogenous ketone drink, designed to help users get into ketosis faster and start losing weight sooner than they would on the keto diet alone. It also contains a variety of additional ingredients that can help support you during a ketogenic diet. 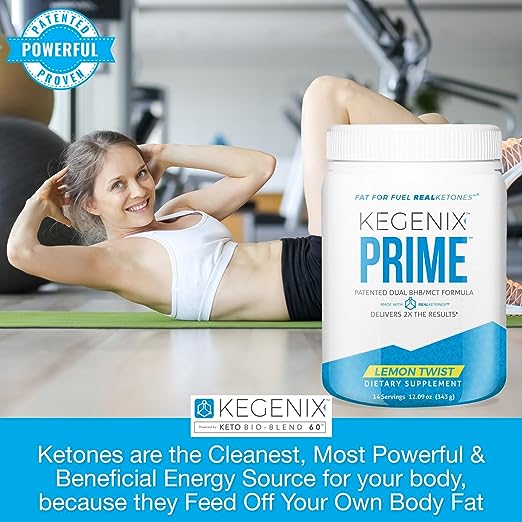 Available in Pomegranate, Lemon Twist or Wild Berry flavors, Kegenix Prime is advertised as being ideal as a pre or post-workout snack, weight loss product, meal replacement, and supplement and vitamin for mental clarity.

What ingredients are in Kegenix Prime?

Where some exogenous ketone products contain very few ingredients other than ketones, Kegenix Prime is much more complicated. This means that Prime is not just designed to support ketosis, but also speed up fat loss and increase your energy levels through several complementary pathways and mechanisms. 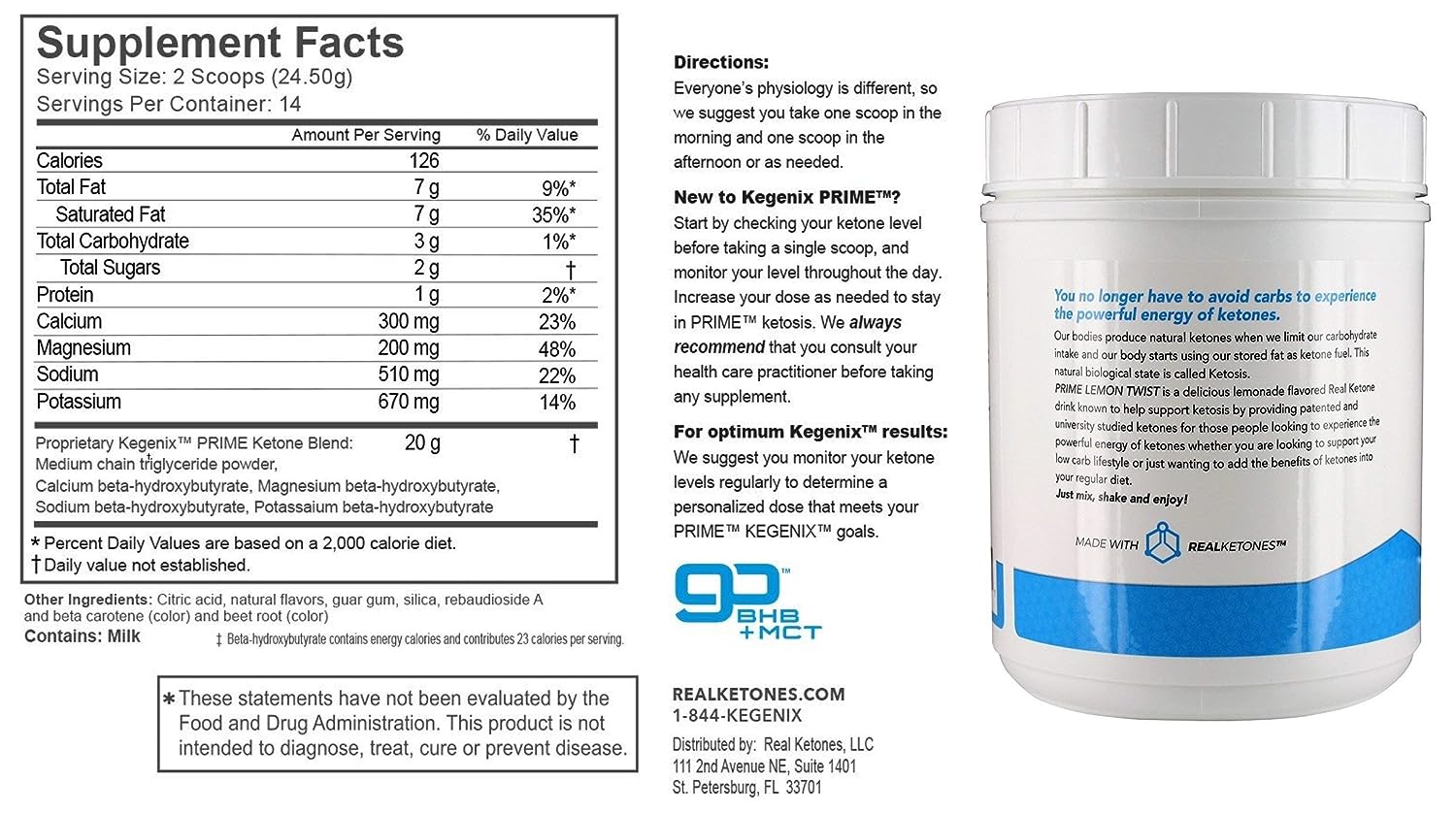 The main ingredients in Kegenix Prime and their basic functions are:

✏️ Beta-hydroxybutyric acid – BHP for short, this is one of three ketones your body can produce and use for energy. It works best in situations where blood glucose levels are low, i.e., during a ketogenic diet.

✏️ Alpha-GPC – Alpha-GPC or Alpha-glycerophosphocholine is used in smart drugs to increase levels of the neurotransmitter acetylcholine. This is thought to enhance cognitive function and aid in stress relief.

✏️ L-leucine – an amino acid that can help promote muscle building in a hypocaloric state. It can also speed up post-exercise recovery and may reduce post-exercise muscle soreness.

✏️ Taurine – an amino acid that helps increase energy and mental focus. Taurine is a common ingredient in energy drinks.

✏️ Green tea extract and yerba mate – sources of caffeine which provide energy and also increase metabolism for faster fat burning. Note: the latest version of Kegenix Prime is caffeine-free, which is good news for those who are overly sensitive to the effects of these stimulants.

✏️ Erythritol – a sugar alcohol and low-calorie sweetener that does not affect blood glucose and will not disrupt ketosis.

✏️ Rebaudioside – another calorie-free sweetener which is made from stevia.

How does it taste?

Kegenix Prime is available in three flavors: Orange Blast, Wild Berry, and Fruit Medley. Unfortunately, according to many reviews, this product does not taste very nice. Users report that none of the flavors taste as advertised. Exogenous ketones have a salty, bitter taste and it seems that Kegenix has found it hard to mask this flavor. The taste, users report, is the biggest drawback of this particular exogenous ketone drink.

How to use Kegenix Prime properly

Kegenix Prime is designed to be mixed with 8-12 ounces of water and consumed within 30-45 minutes of making. The manufacturers recommend that you take one serving first thing in the morning and a second serving later in the day.

Alternatively, avid exercisers are instructed to use Prime as a pre and post-workout drink. However, Kegenix Prime can also be used any time that you feel you need an energy boost, such as during a long drive or when you are working late.

The benefits and advantages of Kegenix Prime

✅ Convenience – Prime is available in single-serving sachets or multi-serving canisters. The sachets make it much easier to consume your exogenous ketones on the go, whereas the canisters are ideal for leaving at home or in the office.

✅ Increased energy – MCTs and the amino acids taurine and l-isoleucine can give you a boost of energy without sugar, carbs, or caffeine. This can be very welcome before a workout or during a long day at work.

✅ Better mental focus and clarity – Kegenix Prime contains the smart drug ingredient Alpha-glycerophosphocholine. This substance helps boost concentration and mental clarity. This may be very welcome because getting into ketosis is often associated with brain fog.

✅ Less severe and shorter keto flu – getting into ketosis takes time. Even after quitting carbohydrates, your body contains stores of carbs that must be depleted before you can enter ketosis. Keto flu is the collective term for the symptoms that often accompany the transition from using carbs for energy to using ketones. Keto flu can last several days to a week or two.

The exogenous ketones in Kegenix Prime increase your ketone levels artificially, which will help alleviate some of the symptoms of keto flu, including muscle cramps, headaches, and low energy levels. As an added benefit, the faster you get into ketosis, the sooner you’ll start enjoying the fat burning effect of the ketogenic diet.

✅ Reduced hunger – the keto diet is not generally associated with severe hunger but, even if you fill up on high fat and high protein keto foods, you may still feel hungry from time to time. Studies suggest that the exogenous ketones in Kegenix Prime can help ward off hunger and cravings, making it easier to stick to your chosen keto diet.

✅ More productive workouts – Kegenix Prime is one of the few exogenous ketone products that seem to be tailormade for exercisers. The combination of exogenous ketones, amino acids, and MCTs will ensure that you not only have plenty of energy for exercise, but you also recover faster after your workouts.

The disadvantages of Kegenix Prime

Kegenix Prime is a very well-rounded exogenous ketone product. It contains a lot of beneficial ingredients that offer a wide range of benefits. However, it is not perfect, and there are a few disadvantages to using Kegenix Prime. Those disadvantages are:

❗️ Taste – we’ve mentioned this before but it’s worth saying again, Prime is not one of the best tasting exogenous ketone products on the market right now. It may well be available in three different flavors, but user reviews suggest that they are all as bad as each other! If you can gulp down 8-12 ounces of water quickly, you may be able to tolerate the unpleasant taste. But if you are more of a sipper than a gulper, you may find this product is undrinkable, even if you mix it with liquids other than water.

❗️ High in calories – some exogenous ketone products are very low in calories. Kegenix Prime contains a hefty 163 calories per serving. This is because each scoop or sachet also contains 21 grams of fat from MCTs. There are also five grams of carbs per serving. Considering this is a weight loss product, the level of calories, fat, and carbs seems a little high. You’ll need to eat less and include these calories, carbs, and fats in your daily nutrition totals. If you don’t, you could find yourself gaining weight and not losing it.

❗️ Risk of allergy – Kegenix Prime is made at a facility that also processes milk, egg, nuts, wheat, and soy. In susceptible individuals, even trace amounts of these substances could trigger an allergic reaction. If you have food allergies, you may want to seek out a product that does not contain these contaminants. Kegenix Prime also contains traces of milk, making it unsuitable for people who suffer from lactose intolerance.

Safety and side-effects of Kegenix Prime

Kegenix Prime was designed by a doctor and has been available since 2016, which suggests it’s safe to use. However, despite what is an excellent track record, Kegenix Prime is not without risks and side effects. Those include:

❗️ Increased urination – Kegenix Prime may make you want to urinate more often. That shouldn’t present too much of a problem during the day could disrupt your sleep at night. This side effect is not limited to Prime and is commonly associated with most exogenous ketone products.

❗️ Anxiety, nervousness, and tremors – earlier versions of Kegenix Prime were a little too good at increasing energy levels! The high caffeine content left a lot of users feeling anxious and edgy. The latest formulation is caffeine-free, so this should no longer be a problem. Make sure your product is the new caffeine-free version to avoid this side effect.

Kegenix Prime is safe for most users but is not suitable or recommended for children, pregnant or nursing mothers, or diabetics. Despite being formulated by a doctor, if you are unsure if this product is right for you, you should speak to your own physician before trying it.

Kegenix Prime has been around for a few years, and that strongly suggests that it performs as advertised. If it didn’t, it would no longer be available. If you can get over the famously unpleasant taste, Kegenix Prime could help you get more from your ketogenic diet. It contains all the ketones and nutrients you need to beat the keto flu and will also give you the energy you need to power through your workouts.

The high MCT content is also very beneficial, especially if you usually use MCTs as part of your ketogenic diet. Available in multi-serving containers or individual sachets, it’s a convenient, easy product to use.

However, its high-calorie content means that this product is almost a meal replacement drink, and that means you’ll need to allow for these extra calories when you plan your meals and menu. You’ll get the best results from this product if you exercise regularly and follow a strict keto diet. If you exercise rarely and aren’t on keto, this product won’t do much for you.

Kegenix Prime is a nutritional supplement that helps you get more from your ketogenic diet. Find out what other benefits you can get from Kegenix Prime.

We collect information from many stores for best price available

Keto Headache: What is it and How to Cure it!